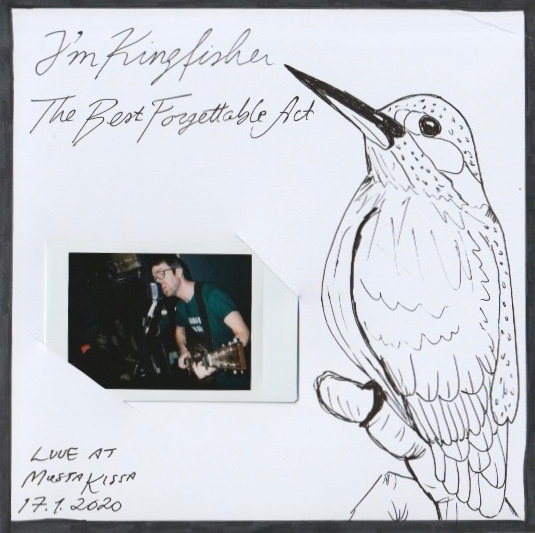 Posted on January 8, 2020 By flycatcherfinland

Cover includes an original polaroid by Kevin Pollard from the I’m Kingfisher gig at Musta Kissa, Kallio, Helsinki on 17.1.2020

Front and back covers hand-drawn by Anna-Stina Jungerstam with polaroid photo taken on the single release night by Kevin Pollard at Musta Kissa 17.1.2020. Cover number can be found fro the number of lines on the kingfisher’s shoulder. This is number 5, as is the vinyl, but cover and vinyl numbers do not necessarily match up.

7″ single 5/16. Each single was signed by I’m Kingfisher on the night.

Lyric sheet art by Kristian Ingers. This art was originally an option for the cover of the I’m Kingfisher album Transit, but it was never used. The same image was used on the souvenir coaster. The Best Forgettable Act was also inteneded to be included on the Transit album, but was dropped due to vinyl constraints.

Back of the souvenir coaster (40 pieces)

And all in a Flycatcher brown paper bag